EXHIBITION
Dunhuang, through the Lens of James and Lucy Lo

In conjunction with the  Princeton University Art Museum exhibition Sacred Caves of the Silk Road: Ways of Knowing and Re-creating Dunhuang (October 3, 2015–January 10, 2016) 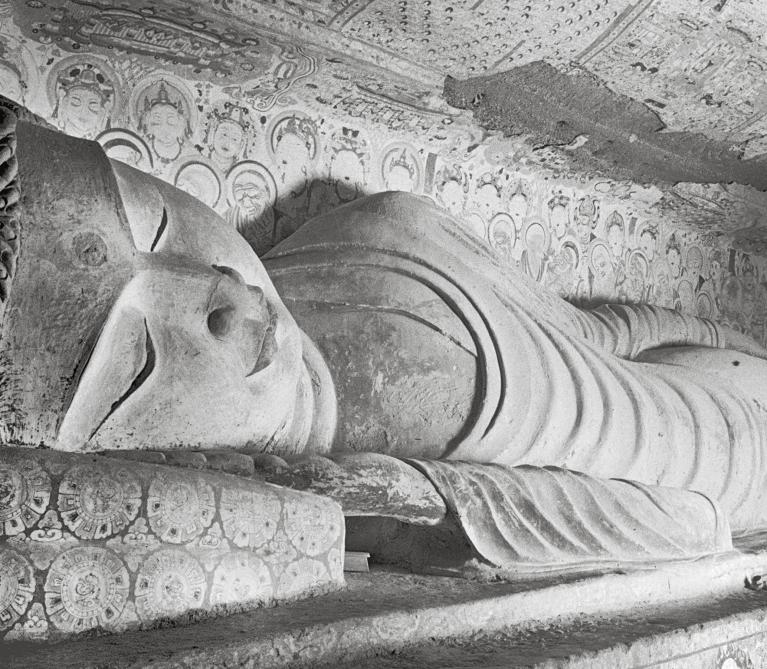 In March 1943, James C. M. Lo (1902–1987) and his wife, Lucy, arrived in Dunhuang, an oasis town situated at the convergence of the northern and southern routes of the ancient Silk Road. A professional photojournalist for the Central News Agency, James Lo had taken a year’s leave to photograph the Mogao Caves, 25 kilometers southeast of the town of Dunhuang, on the edge of the Taklamakan desert in western China, and the Yulin Caves, located more than 100 kilometers farther east. The Los (Lucy, too, was a staff photographer) and their colleague Gu Tingpeng remained at the sites for eighteen months, systematically photographing the exteriors and interiors of the Mogao and Yulin Caves. The Mogao Caves alone are comprised of more than 700 caves dating from the 4th through the 14th century, nearly 500 of them decorated with 45,000 square meters of wall painting and approximately 2,400 sculptures. The murals and stucco sculptures, and the thousands of manuscripts discovered in 1900 in the famous “Library Cave,” represent nearly every aspect of Buddhism in China, both artistically and doctrinally.

Using three cameras — a large 6 × 8” field camera that required loading, in complete darkness, sheets of film into holders that fit onto its back; a 4 × 5” Speed Graflex, which required similar film preparation; and a 35-mm Leica equipped with several lenses — the Los created an archive of over 2,500 black-and-white images. This stunning feat of documentation reflected great ingenuity and organization. Devising a system of mirrors and stretched white cloths, they cast light into the caves; in processing the exposed film, they had nothing more than a makeshift darkroom without electricity and whose running water was redirected from a nearby stream. The collection of photographs — the Lo Archive housed in Princeton’s Department of Art and Archaeology — both preserves invaluable historical views of the caves (which have changed greatly over the intervening seven decades) and offers images of unusual aesthetic value. James Lo went beyond minimal standards of documentary and expeditionary photography to create images that cross into the realm of artistry. The selection of photographs exhibited highlighted his technical virtuosity and his remarkable aesthetic sensibility.

This exhibition, along with objects from the exhibition Sacred Caves of the Silk Road: Ways of Knowing and Re-creating Dunhuang, traveled to the Seattle Asian Art Museum to form the core of the museum’s exhibition Journey to Dunhuang: Buddhist Art of the Silk Road Caves, which was on view from March 5 to June 12, 2016. The following year, Dunhuang, through the Lens of James and Lucy Lo was exhibited at the University of Mississippi Museum, where it was on view from January 10 to April 29, 2017.